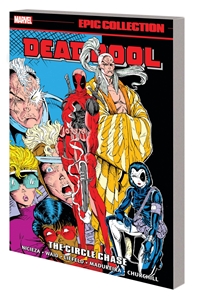 Heeeeere's Deadpool! He's the Merc with a Mouth, the Regeneratin' Degenerate, the Sassin' Assassin, now in his own Epic Collection! Debuting as a fasttalking thorn in Cable and X-Force's sides, Deadpool quickly stole the spotlight. Now, with sidekick Weasel in tow, he sets out on a quest for romance, money and mayhem - not necessarily in that order! Wade Wilson must unravel the mystery of Tolliver's Will, but when the Juggernaut crashes Deadpool's party, it's the unstoppable vs. the un-shut-up-able! Can the beguiling Siryn inject a little sanity into the proceedings? And what tragic secrets of Wade's past will be revealed? Collecting NEW MUTANTS (1983) #98; X-FORCE (1991) #2, #11 and #15; NOMAD (1992) #4; DEADPOOL: THE CIRCLE CHASE #1-4; SECRET DEFENDERS #15-17; DEADPOOL (1994) #1-4 and material from AVENGERS (1963) #366 and SILVER SABLE & THE WILD PACK #23.