Icons of the Realms: Archdevils - Bael, Bel, and Zariel 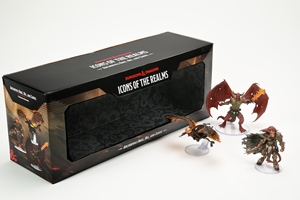 With the Blood War raging for eons and no end in sight, opportunities abound for ambitious archdevils to win fame, glory, and power in the ongoing struggle against the demons.

Duke Bael, one of Mammon's most important vassals, has won fame and acclaim for his victories. Charged with leading sixty-six companies of barbed devils, Bael has proven to be a tactical genius, earning esteem for himself and his master as a result of victory after victory over the abyssal host. Mammon relies on Bael, because of his battle acumen, to safeguard his holdings. Mammon has never been ousted during a time when so many other archdevils have lost their positions, which is a testament to Bael's skill on the battlefield.

From his bastion, Zariel's second-in-command and the former lord of Avernus Bel oversees the forges that furnish weapons and armor for the Blood War. Though Asmodeus has instructed Zariel to accept Bel as her advisor, Bel and Zariel loathe each other and invent distractions to keep them apart.

Once a mighty angel charged with watching the tides of the Blood War, Zariel succumbed to the corrupting influence of the Nine Hells and fell from grace. Asmodeus admired Zariel's passion for war and offered her rulership of Avernus. She accepted his offer and was transformed by Asmodeus into an archdevil.