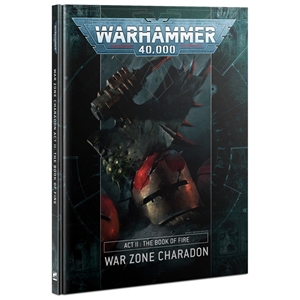 War Zone Charadon – Act I: The Book of Rust saw Typhus invade the sector, bringing it to its knees, and now, Act II: The Book of Fire brings this epic battle to its conclusion. The forces of the Death Guard march ever closer to victory on Metalica, whose loss would be catastrophic for the Imperium’s future war efforts across the Segmentum, while a force of shadowy malevolence takes advantage of the chaos to enact a scheme millennia in the making.

The book features a wealth of background information plus a narrative campaign allowing you to play out the key engagements for yourself and see how you match up to Typhus and Morvenn Vahl as generals. There are also two new Armies of Renown in the form of The Disciples of Be’lakor and Skitarii Veteran Cohort, and a codex supplement for the Adepta Sororitas Order of Our Martyred Lady.

The book also collates a range of existing rules for the Chaos Space Marines in one place. They have been updated with their relevant FAQ changes and formatted for the current edition of Warhammer 40,000 to give you an easy overview of their Traits, Stratagems, and Relics.