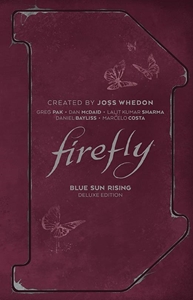 Mal Reynolds, Captain of the spaceship Serenity, has unexpectedly found himself in a job he never dreamed...Sheriff of the entire Georgia Sector!

In order to protect his mom (that's the infamous Outlaw Ma Reynolds) from the Alliance, he'll need to capture her before they do. And that plan will pit Mal directly against the crew of the Serenity itself.

But when a new outlaw, calling himself the Bandit King, and the Blue Sun Corporation, which has helped run the 'Verse from the shadows for years, start causing problems in Mal's sector, he'll have no choice but reunite the crew for one last impossible job to save everyone they love!