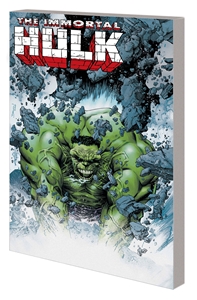 The Immortal Hulk stars in tales to astonish from some of the most incredible talents in comics! When Bruce Banner wakes up as himself in the dead of night, he thinks he's finally free. But the Hulk is immortal, and he has a new alter ego: Peter Parker! Then, after a young girl goes missing on a Kansas farm, Banner searches for answers. But this town doesn't take kindly to strangers - especially the big, green, violent kind. When a new gamma-powered villain shows up in a small New Mexico town, Bruce is forced to confront the source of his anger - and it's not what you expect! And 10,000 years ago, who was the first to open the immortal Green Door?! Collecting IMMORTAL HULK: GREAT POWER, IMMORTAL HULK: THE THRESHING PLACE, IMMORTAL HULK: FLATLINE and material from IMMORTAL HULK: TIME OF MONSTERS.