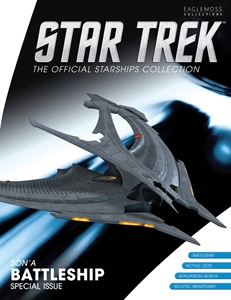 A large war-vessel employed by the narcissistic alien Son'a, the Son'a battleship shared design elements with their more heavily-armed battlecruiser. When the Son'a attempted to use their Injector craft (also called the "metaphasic collector") to destructively harvest the radiation of the planet Ba'ku, several Son'a battleships were sent to accompany the massive collector vessel - and prevent the U.S.S. Enterprise-D from alerting the Federation.

When designing these ships for Star Trek: Insurrection, famed designer John Eaves sought to create an entirely new aesthetic for the series - and took inspiration from both boomerangs and pianos!

This figurine collection includes ships from every Star Trek TV series and movie, recreated with incredible detail and accompanied by a profile magazine.