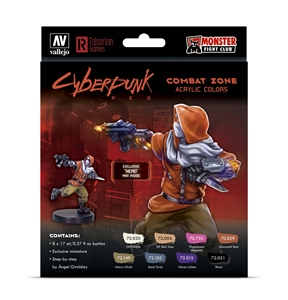 The Combat Zone paint set contains an exclusive miniature of "Nemo" and a dedicated step-by-step painting guide by Ángel Giráldez.

Every city has a Combat Zone: a lawless district where only the desperate live – and few thrive. The Zone crawls with Boostergangs, the cybered, violent detritus of society. Ruling the lawless Combat Zones of Night City, Boosters are part of the darkness that seeps out of the cracks left by Corporate control to wage war across a post-war landscape.

The Cyberpunk Red paint sets are the result of the collaboration between Monster Fight Club and Vallejo. Cyberpunk Red is the new edition of Cyberpunk, the original tabletop roleplaying game of the Dark Future created by Mike Pondsmith and published by R. Talsorian Games. Cyberpunk Red is the original roleplaying game of the Dark Future, the Time of the Red; a world of corporate assassins, heavy-metal heroes and brain burning cyberhackers, packed with cutting edge technology and intense urban action. Here, Megacorps have ravaged civilization and you do what you must to survive. Are you ready to plug in and fight?