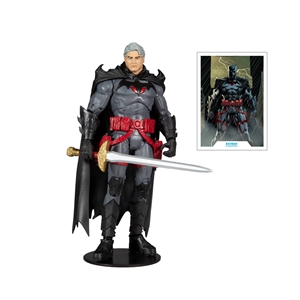 In the alternate Flashpoint timeline, Thomas Wayne and Martha Wayne survived their deadly encounter in Crime Alley years ago, but their young son Bruce was killed instead. Driven by the death of his son, Thomas became Batman. Though, this Dark Knight is far deadlier and more ruthless than the vigilante hero his son would have become. This 7 Inch Scale Flashpoint Batman is based on the 2017 comic Batman #22 and is featured with an unmasked head! Flashpoint Batman comes with two blasters, Amazon Sword, and a base along with collectable art card with Flashpoint on front, and character biography on the back.