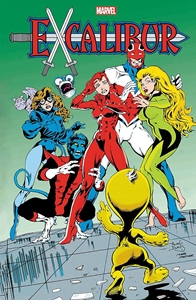 Written and illustrated by Alan Davis and others

Continuing the offbeat adventures of the strangest X-team of all! Legendary creator Alan Davis returns to steer Excalibur to new heights of greatness - and oddness! But the sinister Technet aren't far behind him! As the Captain Britain Corps puts Brian Braddock on trial, the rest of the team must face the fearsome threat of the Anti-Phoenix - but who has been pulling Excalibur's strings since the very beginning? Rachel Summers takes a journey of discovery, the team expands with strange new members, faces from Captain Britain's past resurface when the Warpies and the RCX return and Excalibur takes a trip to the Days of Future Past! Collecting EXCALIBUR (1988) #35-67; EXCALIBUR: WEIRD WAR III, THE POSSESSION, AIR APPARENT and XX CROSSING; SENSATIONAL SHE-HULK #26 and material from MARVEL COMICS PRESENTS (1988) #75 and #110. Rated T+