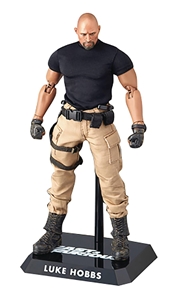 It is with excitement that Beast Kingdom launches a new line of DAH Dynamic 8ction Heroes from the Fast & The Furious series! Agent Luke Hobbs, played by Dwayne Johnson is brought to life in the highly articulated DAH series of action figures! With over 20 movable joints, his muscle definitions and strong physique is accurately recreated for fans. All the clothing is made with real fabric and he comes with a host of accessories including a tactical vest, weapons and a branded base and bracket for the figure. This is one set for fans of the Fast & Furious franchise not to be missed!