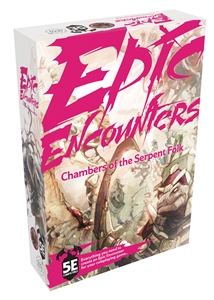 Long ago, the Serpent Folk ruled the world. Now, their forgotten temple echoes with the screech of sarcophagus lids shoved aside as their scaled hands emerge. Now, they are awake. And they are wanting. Can you stop them before they reclaim the world that was once theirs?

Steamforged Games miniatures are sold unpainted and may require some assembly.