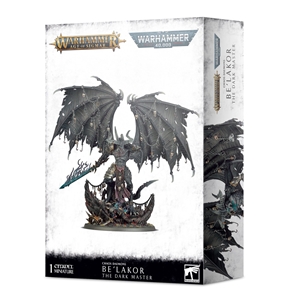 Be’lakor, the Dark Master, the first of the Daemon Princes, and spurned champion of the Chaos Gods, is an otherworldly figure of incredible power. Ancient even when the world-that-was was whole, aeons of scheming and subtle preparation are about to bear fruit as Be’lakor makes a power play of realm-shaking proportions in a bid to replace his hated rival Archaon in the esteem of his divine masters.

It’s not just the Mortal Realms that will feel the sting of his ambition, either, as the 41st Millennium also sees the First Prince step out of the shadows and start carving up some tanks with contemptuous ease. His stunning new model has options for both versions or neither, allowing you to take him onto whichever battlefield you so desire.