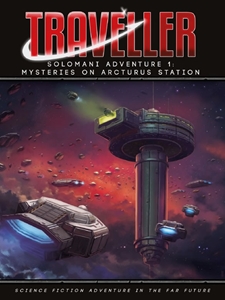 Deep in the Arcturus Belt, Station Three serves as a hub for business, commerce, and much needed rest for hard-working asteroid miners. But beneath the veneer and flashing casino lights, it is a place of theft, treachery, and murder. Mysteries on Arcturus Station contains two separate investigative adventures which can be played individually or as a series, with one crime leading into the next.

In The Hunt For Sabre IV the Travellers are hired by a mining company to locate a missing ore carrier. What they uncover is conspiracy and murder. The Travellers must hurry to find the ship before the criminals can escape.

Murder on Arcturus Station is a reimagining of the Classic Traveller adventure. A corporate executive has been murdered, and Travellers are the prime suspects unless they can catch the killer in time. It is up to the referee to decide which of the ten suspects is guilty and how they did it. Was it the estranged wife? His mistress? The Solomani rebel? The Aslan noble? This adventure provides all the tools to construct each of the possible crimes, complete with motives, clues, alibis, and misleading information pointing to the wrong suspect.