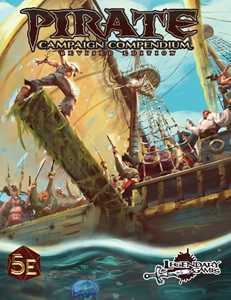 From the jeweled islands of the tropics to the ice-choked polar seas and everywhere across the bottomless briny blue, the Pirate Campaign Compendium from Legendary Games offers 450 pages of amazing expansions for any nautical campaign using the 5th Edition of the world’s most famous roleplaying game. This beautiful book is perfect for embarking on epic journeys of exploration above or below the waves, voyages to distant shores, or full-on pirate campaigns of plunder and pillage! The Pirate Campaign Compendium brings you an incredible collection of rules for nautical campaigns of every kind, including: