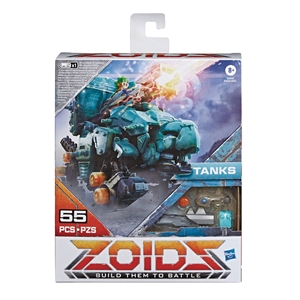 Zoids figures are building toys that battle! This Mega Battlers pack comes with 53 pieces to build a turtle-type Tanks figure. Once built, switch on and watch as he moves with animatronic motion, ready for battle! The toy's motion automatically unleashes a motorized battle move called Wild Blast! As the Tanks figure moves, his dynamic battle move called Laser Cannon will activate!