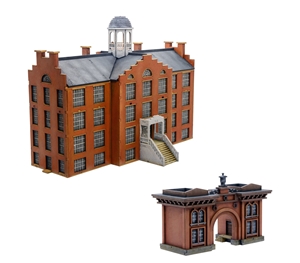 Between July 1st and 3rd 1863, the Battle of Gettysburg was one of the largest battles of the American Civil War fought in the state of Pennsylvania. The Confederate Army under Robert E Lee was defeated by the Army of the Potomac, commanded by George G. Meade. Though Lee’s forces escaped across the river, they left in their wake the bodies of the fallen. These bodies were gradually reinterred into what is now the Gettysburg National Cemetery, the site where Lincoln delivered the famous Gettysburg Address of 1863.

This scenery pack is designed to allow you to lend your replications of the battle using the Epic Battles system extra authenticity. It includes the Schmucker House, originally constructed as the Theological Seminary building. This site was used by both the Union and Confederate forces as a hospital during the battle.

The Cemetery Gatehouse, meanwhile was used as a HQ for XI Corps (Union Army). Major-General Howard had recognized the advantage offered by the high ground of the cemetery and lined his artillery along what came to be known as ‘Cemetery Hill’.