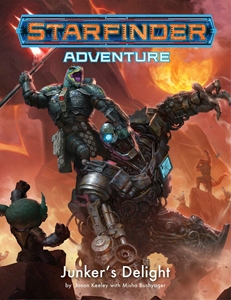 Centuries ago, the Stellar Flarea science vessel researching the strange dimension known as the Drift crashed on the surface of Akiton. Now, Vari-13, an android with a claim to the Stellar Flare, wants to find the wreck and rescue its valuable research. But Vari-13 will need help, and thats where your heroes come in. The Stellar Flare's remains lie in the middle of an enormous junk field filled with malfunctioning technology, inhabited by predatory creatures, and fought over by territorial space goblins. And there are whispers of an enormous robot made entirely of junk that wanders the scrapyards, immune to magic and eager to destroy everything in its path. Can your heroes broker a peace, reach the wreckage, and defend it against an army of scavengers?