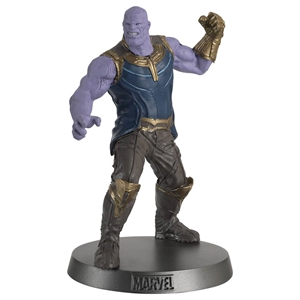 A powerful alien warlord, Thanos was known to many as the Mad Titan. He scoured the galaxy in search of the Infinity Stones, artifacts of cosmic power with which to fulfill his ultimate ambition - wiping out half of all life in the universe!

This detailed 1:18 figurine depicts actor Josh Brolin as he appeared in the final battle of Marvel Studios' Avengers: Infinity War. Meticulously hand-painted, the model draws out all the details of the looming villain, including his golden Infinity Gauntlet.