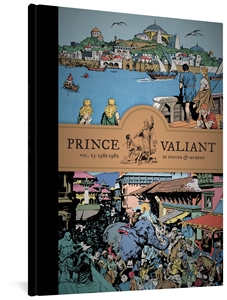 In this volume, there's death, birth, curses, quests, plots, magic, and war. Prince Valiant journeys to the bowels of the Earth on a quest for humanity involving a curse on the Kingdom, monstrous imps, and a mystical casket. Mordred leads an invasion across Britain, culminating in the siege of Camelot. Aleta's pregnancy promises to bring a new child into the family. Arn begins a courtship of Maeve and embarks on quests to obtain the Sacred Ring of India and to find his lost newborn brother. Renowned painter and graphic novelist George Pratt (Batman, Sandman) introduces the volume.