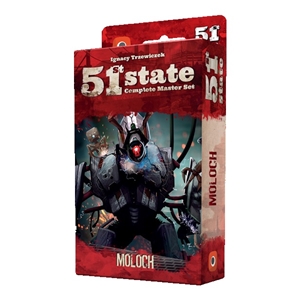 51st State is a card game set in the Neuroshima universe, from Portal Games' best-selling role-playing game. This new expansion brings Moloch -- the harrowing, destructive force of Neuroshima -- to the foreground of your playing experience. It is also a special addition to 2020, the Year of Moloch, a celebration of the 10th anniversary of the 51st State.T he Moloch expansion adds something special to the original mechanics you're familiar with. New cards add Moloch's Machines to attack and destroy you, but you're not alone. This expansion adds a semi cooperative element for extra depth and replayability that allows players of 51st State to enjoy the game further, and keep them coming back for more.