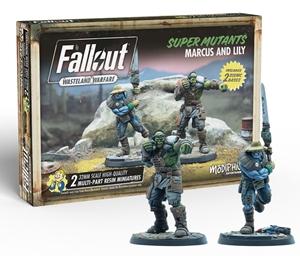 Marcus has been many things: A member of the Master's army, a sheriff in Broken Hills, and now the leader of Jacobstown, a place for Super Mutants and Nightkin to live, albeit somewhat dysfunctionally. He is a veteran of several conflicts and incidents, and while he tries to keep the peace he can hold his own if called to fight. One of this number includes Lily, a Nightkin with multiple personality disorder. She is one part caring grandmother, one part a ravening combat monster named Leo; only time will tell which personality will win out.

Fallout: Wasteland Warfare miniatures are sold unpainted and may require some assembly.