Zorro: Sacrilege and the Rise of the Old Gods 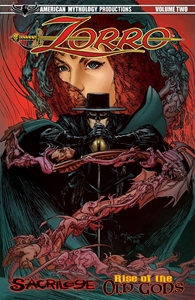 Zorro's supernatural adventures are on fire! Fans of the classic swashbuckling adventure are seeing the masked hero face demons, possessions, and even Cthulhu itself! This incredible second volume of American Mythology's Zorro series includes two full series in this one overstuffed trade collection. In "Sacrilege" the legendary hero, Zorro must face something more terrifying than even the living dead - demonic possession of the innocent! And in "Rise of the Old Gods" Zorro faces horror from the depths as the denizens of dread Cthulhu rise from the ocean depths and descend upon an unsuspecting villa. Celebrate 100+ years of swashbuckling heroics with Zorro!