They Came From Beneath the Sea RPG 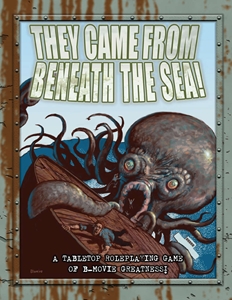 THEY CAME FROM BENEATH THE SEA! is a new tabletop roleplaying game encompassing the wonder, horror, thrills, and hilarity of 1950s science fiction. The players, as humans, live in a world under increasing attack. The attackers? Aliens from beneath the sea, obviously!

THEY CAME FROM BENEATH THE SEA! is powered by Onyx Path s Storypath system, and includes all the rules you need to play as a two-fisted hero dealing with alien threats, including rules for creating characters with a mix of Origins to customize your Archetype. It also has ready-to-play scenarios, along with information on events of the 1950s that you can incorporate into your game with a new fishy taste. And, finally, dozens of antagonists, including a chaotic assembly of conflicting bad guys that create a broad culture for players and Directors to explore, manipulate, and form into a living, gurgling world of aquatic menace.