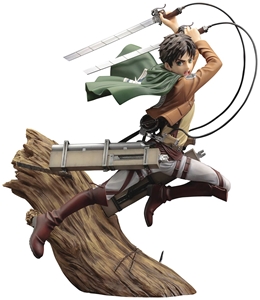 The Kotobukiya ARTFX J series charges forward! From the popular anime series Attack on Titan, the main character of the series, Eren Yeager, joins the ARTFX J lineup in an all-new renewal package variant! Eren's vertical maneuvering equipment has been sculpted in such fine detail that each component keeps the essence of its machine-like look. In addition, every element of the large tree that serves as the base of the figure has also been finely sculpted: from the patterns of the bark to slash marks left across the trunk itself. This figure features a removable cape, so it is possible to display this figure in two different styles.