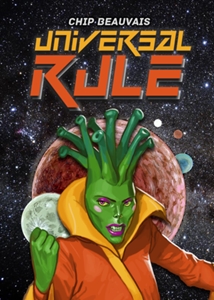 Deep in the Pocket Universe, the balance of power is shifting. Seventeen newly discovered planets are being colonized and tapped for crucial resources. Shifting alliances and stacks of galactic credits influence battles for control. Can you claim universal rule in this 4x wallet game from Button Shy?

In Universal Rule, players battle for control of the universe in this pocket-sized 4X style game. You can colonize new planets, explore new areas on those planets, gain credits based off of the resources that the planet produces, or attempt to destroy other planets that threaten your existence. Other players can follow, but at a cost. The first player to show their true dominance through victory points wins the game.