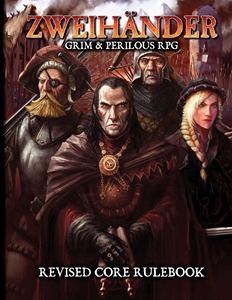 WELCOME TO GRIM & PERILOUS GAMING Winner of the ENnie gold Best Game and Product of the Year at Gen Con 2018, featured on Forbes, ranked one of the best-selling fantasy tabletop role-playing games at DriveThruRPG and having moved over 90,000 copies worldwide, ZWEIHÄNDER Grim & Perilous RPG is a bloodier, grimmer and grittier version of classical tabletop role-playing games. This revised PDF edition is published in celebration with Andrews McMeel Publishing, and features a refreshed layout, new artwork, rules clarifications, color plates by Dejan Mandic and errata. ZWEIHÄNDER Grim & Perilous RPG is a game where your characters will:

Using the Powered By ZWEIHÄNDER d100 game engine, you will create grim characters, write perilous adventures and build your own low fantasy & dark fantasy campaigns. These rules are a perfect fit for Renaissance and medieval-styled adventures, too. You can also use this book to create your own homebrewed worlds. This all-in-one game includes most of what you need to play: a character creation guide, game mastery rules and a bestiary brimming with creatures both fair & foul. All that’s left are a few friends, pencils and a handful of dice. ZWEIHÄNDER Grim & Perilous RPG awaits, and the fate of your grim & perilous tale hangs in the balance!