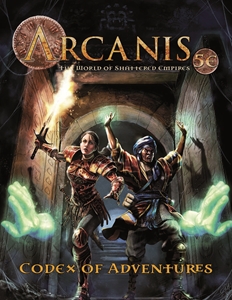 Arcanis: The World of Shattered Empires is a world rife with epic adventure, with ancient mysteries to unlock, long lost tombs to explore, and malevolent adversaries to confront. Within are six adventures written by the industry's most talented authors that will pit you against some of Arcanis deadliest foes!

Delve into Patrick Kapera's Harvest House and discover the deadly secret it holds. Unearth a lost Myrantian tomb battling both the living and the ancient dead in Jeffrey Witthauer's Burial Offerings. Search for kidnapped innocents deep within the Blighted Bog, in Cody Bergman's Unintended Victims. Trail a thief into the Hidden Canyon of Zhu and face a threat from the distant past in Robert J. Schwalb's Shadow of the Serpent Men. Confront a devastating attack by the Harvesters of Ymandragore in Jeffrey Witthauer's Collateral Damage. Travel into the Theocracy of Canceri in Samuel Cluck & Henry Lopez's tale of tragedy and revenge, Heart's Blood, Fire's Vengeance, and stand before cultists prepared to unleash Armageddon upon the world. Epic Adventures and implacable foes await you in the Shattered Empires!