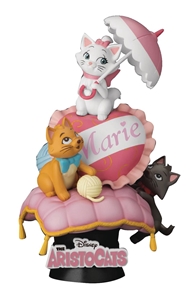 Forward to 1970, and the 20th animated feature for the powerhouse studio was the fun animated adventure comedy: The Aristocats! Based around a group of aristocratic Parisian cats, the story finds the family turning to an alley cat to gain their lost fortunes! The D-Stage diorama shows our high-class felines, including Marie herself adorned with a parasol, sitting on top of a pillow and ball fit for the most elegant of cats. Using 360-degree, detailed 3D modeling technology as well as including an immense amount of details with each title included as a logo on the base, scenes and characters are realized in incredibly fine details. Standing at 6" in height, each diorama perfectly fits with the Beast Kingdom selection of D-Stage Disney collectibles. So make sure you add the entire set today to the ever growing roster of Disney characters and take home a little bit of classic magic today!