Age of Sigmar: Shadow and Pain 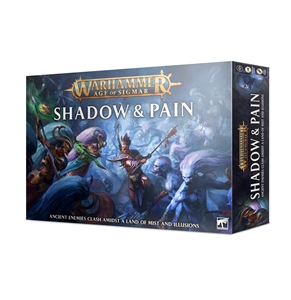 Ancient enemies clash in the latest battlebox for Warhammer Age of Sigmar, including two new Heroes that can currently only be found in this box. Shadow & Pain pits a band of mortal and daemonic warriors devoted to Slaanesh against a zealous coven loyal to High Oracle Morathi.

For the Slaanesh side there's the new Lord of Pain hero, while the Witch Aelves are led by the Melusai Ironscale. The box includes 36 other miniatures to build a complete fighting force for each faction.

The 40-page booklet included in Shadow & Pain details the desperate fight between these ancient enemies. The box also includes a booklet of core rules for Warhammer Age of Sigmar, as well as a set of counters, reference cards, and handy tokens and measurers. In short, grab some dice and you’ve got everything you need to play some games right out of the box!