Philosophia: Dare to be Wise 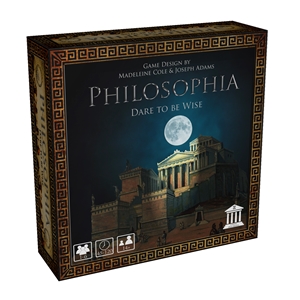 Live an epic odyssey adventure as one of ancient Greece's greatest thinkers in this new sandbox, tabletop experience. Forge your destiny in an age of city states and ancient wisdom. In Philosophia: Dare to be Wise you will build schools, battle it out in public debates, learn profound wisdom and make deals with the Olympic Gods. All in an attempt to prove yourself the greatest mind of the era.

The goal in Philosophia is to gain three Labyrinth Tokens before the ancient Greek World is superseded by the Romans. There are many different paths you can take to do this; from building schools dedicated to your teachings, to locking yourself away in temples to develop your ideas. All players who gain 3 Labyrinth tokens will finish the game with a tense final public debate; exchanging Sophistry and Syllogistic arguments until one thinker is crowned the greatest.