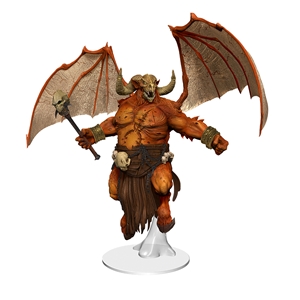 Orcus is the Demon Prince of Undeath, known as the Blood Lord. He takes some pleasure in the sufferings of the living, but far prefers the company and service of the undead. His desire is to see all life quenched and the multiverse transformed into a vast necropolis populated solely by undead creatures under his command.

Orcus rewards those who spread death in his name by granting them a small portion of his power. The least of these become ghouls and zombies who serve in his legions, while his favored servants are the cultists and necromancers who murder the living and then manipulate the dead, emulating their dread master.

Orcus is the first figure in WizKids D&D Icons of the Realms: Demon Lords line of super premium figures! Orcus is a huge figure standing on an impressive 100mm base.