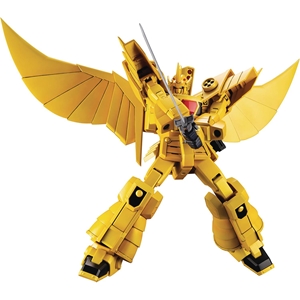 From the anime The Brave of Gold Goldran comes the fourth addition to the Kotobukiya Brave model kit series: Sky Goldran! You can reenact scenes from various parts of the anime by recreating both forms of Sky Goldran, and each part has been carefully designed to match the proportions in the anime character designs, and includes flexible joints, giving this model many options to pose! With the pop-out joints, you can recreate various abilities such as Ittou-Ryoudan-Giri and Gale Thunderclap Slash! The model is equipped with several 3mm and 5mm connection points, making it compatible with existing Brave Girl, Frame Arms, and Frame Arms Girl.