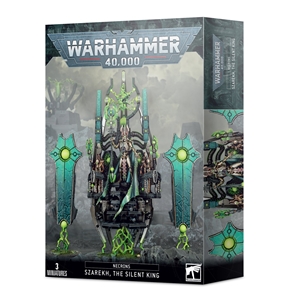 Even without the not-so-subtle effects of his dais’ obeisance generators, it would be difficult to resist kneeling before the sheer majesty of the Silent King. Szarekh is accompanied by two Phaerons – newly elected members of the Triarch, who bear their relics of office. Behind the Silent King writhes the bound essence of a C’tan Shard known only as the Enchained, whose otherworldly powers fuel the dais and the incandescent annihilator beams that erupt forth from the Triarchal Menhirs that flank Szarekh at all times.