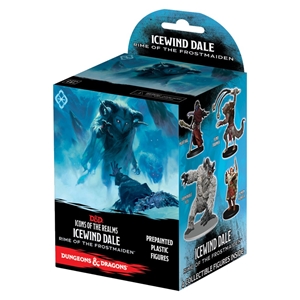 Collect all 45 figures from Icewind Dale: Rime of the Frostmaiden, the newest set of randomly sorted monsters and characters in our exciting line of D&D miniatures, Icons of the Realms.

Only the bravest of adventurers have the fortitude to wend their way past the Spine of the World and explore the dimly lit isolation that is the frozen tundra of Icewind Dale. An unnatural, never-ending storm of ice and snow descends upon the region, beckoning adventurers from across Faerûn to investigate its mysterious source. Will you be able to discover the source of this frigid maelstrom, or will the Ten Towns be forever buried underneath the snow?

The Icewind Dale: Rime of the Frostmaiden line includes bone chilling new monsters to confront, like the unnerving Tomb Tapper and ferocious Abominable Yeti. You can also interact with many of the denizens of the Ten Towns, like the Reghed Nomads as they fish for their most precious resource, Knucklehead Trout. The set also includes the many forms of the Frostmaiden herself, should you dare to incur her wrath!