Hellboy: The Board Game - Hellboy In Mexico Expansion 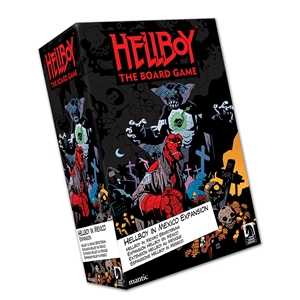 Hellboy was sent to Mexico to deal with a large outbreak of supernatural activity. Many people were killed and Hellboy did what he could. He teamed up with three luchador brothers who had received a vision from the Virgin Mary to quit wrestling and start fighting monsters. The four fought monsters all day and drank all night. One night the youngest brother wandered off and was taken by the monsters. The remaining three looked for him but could not find any trace.

Features an innovative case file system to run each mission for you. BPRD case files will set the scene, each being Top Secret so players will have no clue what they’re about to face!

In addition to the Case File system, the DECK of DOOM! will attempt to ruin even the best laid plans. Each turn, you will draw a card from the DECK of DOOM!, these cards may spawn new enemies or even target specific agents with effects.

Mantic Games miniatures are sold unpainted and may require assembly.