Traveller RPG: The Last Train Out of Rakken-Goll Adventure 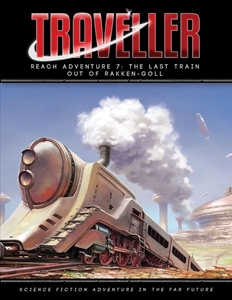 An invitation from Sir Willard Vorstaten leads the Travellers to Rakken-Goll, a dying cattle town in the middle of nowhere. Instead of the expected job offer the Travellers find a lonely young man desperate for offworld visitors. Sir Willard’s residence is comfortable and he is generous; perhaps the Travellers will enjoy some downtime at his expense? Perhaps he might be a useful contact to cultivate; who knows where his duties as a noble will take him next?

Events around Rakken-Goll overtake the Travellers’ plans. Fire, flood and feuding threaten to wipe out the town’s economy and perhaps even destroy it. Sir Willard has the authority to act and he is eager to do right...but he is inexperienced and indecisive. He invited the Travellers because he wanted to make some friends, but now he needs allies...allies who can help him stop the last train out of Rakken-Goll.