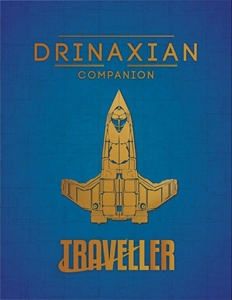 The Drinaxian Companion is an expansion to both the Trojan Reach and the Pirates of Drinax campaign, and useful for any and all pirate-based adventures in Traveller.

This volume presents additional rules and adventure possibilities, along with a useful summary of the Pirates of Drinax campaign and locations featured within it. New aspects of the Trojan Reach sector are explored with Central Supply Catalogue and High Guard additions that cover the Sindalian Empire, base building, and new starships such as the Rorix Command Vessel, Cestion Strike Boat, and the ECITS modular system that permits the quick and easy customisation of a standard vessel to accommodate a massive range of functions.

Inside you will find: