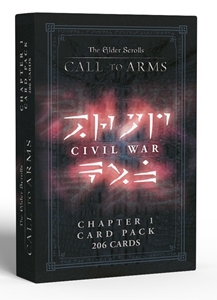 Civil War is the first Chapter Expansion for Elder Scrolls: Call to Arms. It includes cards for Imperial and Stormcloak soldiers, plus additional adventurers and Adversaries such as Draugr and Skeletons. Additional Battle Mode and Delve Quests, Traps and Events expand the narrative adventure game. Equip your heroes with new weapons, spells, armor and enchantments to overcome the dangers of Skyrim. This card pack contains 218 cards containing new heroes, followers, adversaries, upgrades, quests, traps, events and more to allow players to use the new models in Chapter 1 and customize their Elder Scrolls: A Call to Arms miniatures.