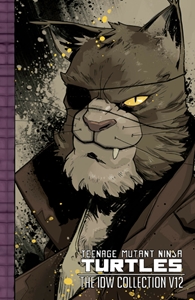 Donatello understands that more is at stake than his brothers realize. In order to prepare for the coming conflict, Don will aim to repair his relationship with his mentor, Harold... and his malicious robotic counterpart, Metalhead! Then, Michelangelo's deteriorating relationship with his father, Splinter, reaches a point of no return! Will Mikey fight those he loves to save those who need him the most? Plus, multiple sources of conflict collide as the maniacal Agent Bishop goes to war with the alien forces on Earth, driving the Turtles to embrace unsavory alliances and race to stop a massacre. And, everyone's favorite mutant warthog and rhino are on a road trip back to NYC, but can they make it before they become completely human again?