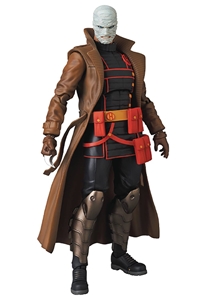 Based on the best-selling series Batman: Hush by Jeph Loeb and Jim Lee, Medicom unveils their newest release in their new DC Comics MAFEX line of 6" articulated figures! Featuring a high level of articulation, this Hush figure is sculpted from original designs by Jim Lee! Hush wears his signature coat and comes with multiple exchangeable hands, pistols and other acessories, and three different head designs including an unmasked version! Hush also includes a movable figure stand to easily reproduce any scene from the comic.