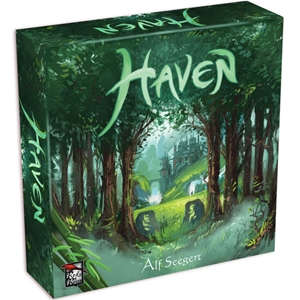 The mystical forest has been home and haven to beasts, spirits, and forgotten gods for thousands of years. While the Forest Guardian slumbers, a nearby human village has grown into a city, a monster of iron and furnaces, hungry for the resources of the forest. Can the forest creatures discover enough potent lore to defend their ancient home from the ravenous city? Or will the city use this lore to power their machines and turn the forest against itself? The battle for HAVEN begins!

In HAVEN, you and your opponent battle for control of a mystical forest. The forests Guardian Spirit sleeps deeply and can no longer protect his kingdom. One of you controls the City in an effort to master the vulnerable forest using iron lore and machines. The other plays as the Forest and its creatures who attempt to defend their home with the aid of leaf lore and forest spirits.