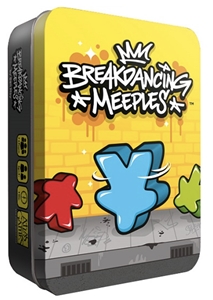 When beats bump, meeples gotta dance. From headstands to footwork, you know your dance crew is the hottest around-- but now its time to prove it.

Each player has six dancers and two dance routines to start. Players roll and re-roll meeples like dice, everyone at once, fast as they can. Dancers team up based on the way they land, to do dance routines like Whirlyball, Streetsweeper, and Early Bird. Compete against rival crews for the world championship trophy in four one-minute dance offs, racking up crowd appeal by completing Routine cards. Between each dance off, crews learn a new Routine. The crew with the most crowd appeal at the end of four rounds takes home the trophy!