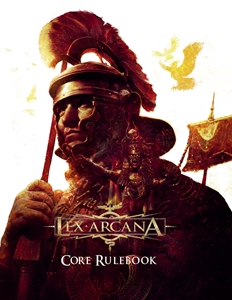 Lex Arcana is a roleplaying game whose unique setting merges history, mythology and legend. It is a world where Roman imperial legions clash with barbaric hordes on the field of battle, while ancient monsters, mystical powers and nameless cults threaten the rule of the Caesars from within.

Players take on the role of Custodes (wardens) of the Cohors Auxiliaria Arcana, imperial agents sent on missions to the most distant and dangerous corners of the Roman Empire and beyond.

We are at the end of the fifth century AD, thirteen centuries since the founding of Rome. The Empire has not fallen. In this alternative timeline, Rome has avoided its end by using its haruspices, sages and oracles, escaping the sequence of events which in actual history brought to its fall.

The Empire’s stability has allowed it to strengthen itself for decades and has not suffered any drastic changes, invasions and the breaking up of its territory. Economic growth has brought greater wealth to all the population and many peoples outside its borders are considered Roman citizens, protected by the invulnerable Pax Romana (the Roman Peace). But the Empire’s mighty and invincible legions and divinatory rituals are no longer enough to protect the Empire.

Other powers are working, hidden behind the veil of tangibility: ancient demons, dark magic, witchcraft and monsters from forgotten depths.

Originally published in Italy in 1993, Lex Arcana was designed by an exceptional team of authors: Dario De Toffoli, Leo Colovini, Marco Maggi and Francesco Nepitello. For the new edition, the same team is now reunited under the creative direction of Andrea Angiolino, to create a game that will appeal to veteran players and newcomers to Lex Arcana alike.