Numenera RPG: Voices of the Datasphere 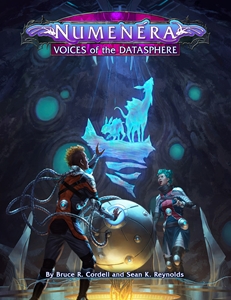 No other aspect of the Ninth World evokes as much wonder -- and generates as many questions from Numenera players -- as the datasphere. This hardcover sourcebook opens up a whole new aspect of game play, in which characters interface with and explore the reaches of the datasphere. (Think Tron.)

This strange new metaspace is not just an ancient alien data network, but in fact multiple such networks -- some damaged, incomplete, or aged and evolved past their original purpose -- created by myriad civilizations and interacting in unexpected ways. The datasphere offers knowledge to be learned, treasures to be discovered, and wholly new challenges to be overcome.

The first in-depth look at an important part of the Ninth World setting of Numenera. Players have clammored for this! A new region of the Ninth World to explore and a whole new mode of gameplay as players enter the virtual metaspace of the datasphere. Unlocks secrets of the prior worlds that players have speculated about since the introduction of Numenera, such as the origins of the Clock of Kala. Numenera is renowned for challenging expectations about what an RPG experience can offer. Players looking for something different will find it in Numenera, and in the datasphere!