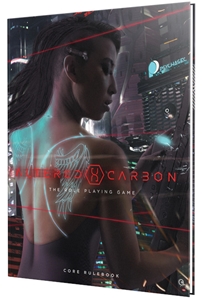 In this transhumanist vision of the future, the human mind is nothing more than digital code – Digital Human Freight – saved and stored in a Cortical Stack, advanced technology that allows you to “re-sleeve” your entire consciousness into a new body. You can wear any body you can afford, transmit your mind across the cosmos in an instant, and, if you’ve got the credits and political cachet, you can re-sleeve time and again for centuries, accumulating enough wealth and power over the millennia to become the societal equivalent of an immortal god.

Whereas character death is a natural occurrence and ever-present threat in tabletop RPGs, Altered Carbon: The Role Playing Game offers a unique angle on the concept. As opposed to creating a brand new character, players will have the opportunity to transfer their character’s consciousness, memories, and experiences into new Sleeves post-death… but at a cost.

Mind you, immortality is not invincibility. Losing a Sleeve is a life-altering setback, and “Real Death” awaits anyone whose Stack is destroyed. That being said, Sleeves introduce their own refreshing challenges to players and storytellers alike. Augmentations can instantly upgrade your athleticism, but a world-class surgeon in an unadjusted Sleeve can botch a basic procedure. The possibilities for characters and campaigns may change from one Sleeve to the next... making long-term gameplay more versatile, while empowering the story to steer character advancement at its own pace.

The Core Rulebook contains everything gamemasters and players needs to play the game.