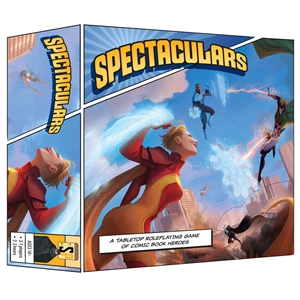 Spectaculars is a tabletop roleplaying game where players create their own comic book universe, craft heroes and villains to populate that universe, and then play through full-length campaigns to tell incredible stories of heroism and villainy in a world of their own creation. This box set game gives a gaming group everything they need to play the game, and to create their own consistent campaign that spans multiple comic book genres.

Through play, each copy of Spectaculars evolves into its own unique comic book universe; in essence, the players create, through play, a rich backdrop against which their heroes and villains clash. The nature of the setting is determined by the players. Is your setting’s home city built on top of a dimensional rift, spilling dark magics into the world? Is the government agency that oversees superpowered activity made up of men and women in black suits and sunglasses, operating in a loose affiliation of independent cells in all of the world’s major cities? Is the star empire that chases refugees to Earth a tyrannical, conquering horde looking to make humanity its next victims? You decide which of these are true for your setting. Spectaculars makes it easy to create a fully fleshed-out setting, guiding you the process of creating the setting’s major elements at the time they come into play.

Spectaculars is designed to be played with minimal preparation. Once all of the players know the rules of the game, you can start playing a scenario with brand-new characters in a matter of minutes. Character creation is fast and easy, and the game comes with over 50 fully designed scenarios spread across four comic book genres. With Spectaculars, you can run multiple satisfying, evolving campaigns right out of the box, with no need to spend hours doing advanced work to prepare for the session. It’s the perfect game for people who want the satisfaction of playing an ongoing campaign, but don’t have the time to dedicate away from the game table.

Each copy of Spectaculars will include the following components right in the box: