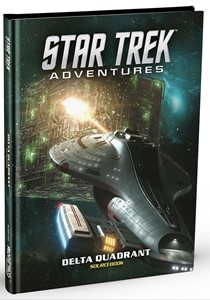 The Delta Quadrant Sourcebook provides Gamemasters and Players with a wealth of information to aid in playing characters or running adventures set within the ever-expanding Star Trek universe.

The Delta Quadrant Sourcebook contains: Detailed information about the post-war Federation and U.S.S. Voyager's monumental mission, bringing the Star Trek Adventures timeline up to 2379. Information on many of the species inhabiting the quadrant, including the Kazon Collective, the Vidiian Sodality, the Malon, the Voth, and more. Extensive content on the Borg Collective, including their history, hierarchy, locations, processes, and technology. A dozen new species to choose from during character creation, including Ankari, Ocampa, Talaxians, and even Liberated Borg! A selection of alien starships, including Kazon raiders, Voth city-ships, Hirogen warships, and a devastating collection of new Borg vessels. Guidance to aid the Gamemaster in running missions and continuing voyages in the Delta Quadrant, with a selection of adventure seeds and Non-Player Characters.