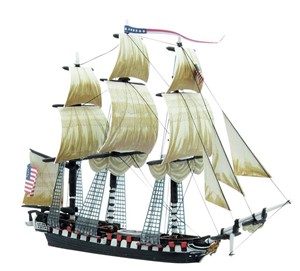 The USS Essex was a 36-gun frigate that participated in the Quasi-War with France, the First Barbary War, and the War of 1812. She was very successful in disrupting British whaling in the Pacific, before being captured in 1814, and re-purposed as the HMS Essex under the Royal Navy. Contains one resin and metal vessel.