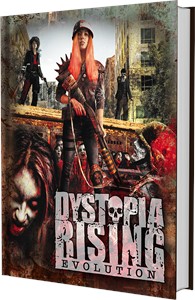 Dystopia Rising: Evolution is the latest edition of the Dystopia Rising post-apocalyptic tabletop roleplaying game that quickly grew into a live-action sensation. Onyx Path is pleased to update the earlier edition and incorporate elements from the live-action setting to present a fresh and exciting take on the post-apocalyptic genre in a new corebook.

Dystopia Rising: Evolution is a 8-inch by 11-inch hardcover book, approximately 250+ pages, with full color interior art. Contents include: A look at the background of Dystopia Rising: Evolution, including some insight into the people that live in this post-apocalyptic world. How the survivors of the Fall are categorized into eight Lineages. Each Lineage has a handful of Strains that fight to reclaim the world that was destroyed. Core rules, threats, and character creation. Advice for surviving harsh environments, navigating new factions, dealing with violence, and leaning on faith to cope with the harsh reality. A spotlight on how the discovery and cultivation of psychic potential affects players. and much, much more!

In Dystopia Rising: Evolution, no one knows how long it`s been since the world was blasted with nuclear radiation and became infected with the undead. Major cities were all but destroyed; transit is reduced to animals, wagons, and the occasional iron horse. The survivors of the Fall were the first strain of deviation from the human condition and were able to make it through the rapidly spreading epidemic. This is dystopia. The world is broken. Will you pick up the pieces? Make a new world from the remains of the old?