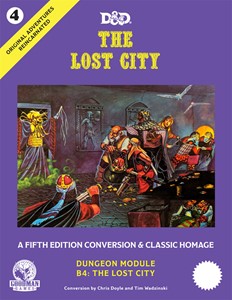 First published in 1982, B4: The Lost City was designed as a stand-alone adventure for use with the Dungeons and Dragons Basic Set. Author Tom Moldvay wrote the adventure with the intent of teaching novice gamemasters how to craft and run a dungeon. For that reason, many areas of the original adventure—including much of the titular city itself—are left undefined. And if you’ve read any of the earlier releases in the OAR series, you know that those areas are not going to be left blank for the Fifth Edition translation!

OAR #4: The Lost City will combine scans of the original edition of the module with 5E conversions and new material, as with prior books in the OAR series. The conversion is being handled by Chris Doyle and Tim Wadzinski, the same team responsible for OAR #1: Into the Borderlands and OAR #2: The Isle of Dread.